Bursts of gamma rays from the center of our galaxy are not likely to be signals of dark matter but rather other astrophysical phenomena such as fast-rotating stars called millisecond pulsars, according to two new studies, one from a team based at Princeton University and the Massachusetts Institute of Technology and another based in the Netherlands.

Previous studies suggested that gamma rays coming from the dense region of space in the inner Milky Way galaxy could be caused when invisible dark matter particles collide. But using new statistical analysis methods, the two research teams independently found that the gamma ray signals are uncharacteristic of those expected from dark matter. Both teams reported the finding today in the journal Physical Review Letters. 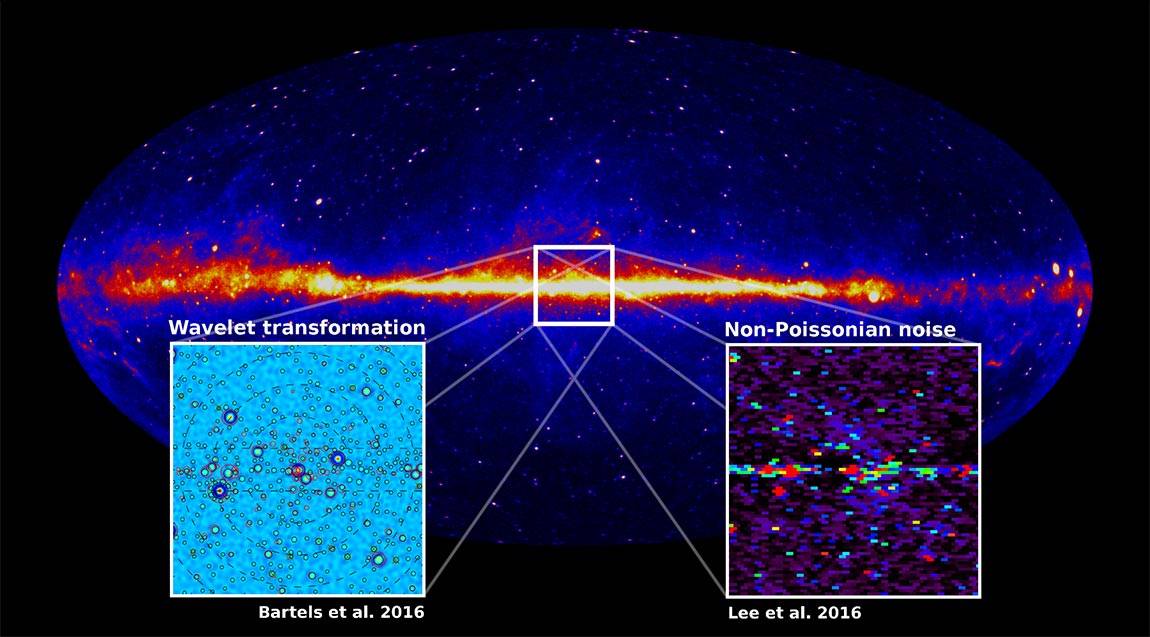 Studies by two independent groups from the U.S. and the Netherlands indicate that the observed excess of gamma rays from the inner galaxy likely comes from a new source rather than from dark matter. The best candidates are rapidly rotating neutron stars, which will be prime targets fur future searches. The Princeton University/Massachusetts Institute of Technology research group and the Netherlands-based group used two different techniques, non-Poissonian noise and wavelet transformation, respectively, to independently determine that the gamma ray signals were not due to dark matter annihilation. (Image courtesy of Christoph Weniger, University of Amsterdam)

"Our analysis suggests that what we are seeing is evidence for a new astrophysical source of gamma rays at the center of the galaxy," said Mariangela Lisanti, an assistant professor of physics at Princeton. "This is a very complicated region of the sky and there are other astrophysical signals that could be confused with dark matter signals."

The center of the Milky Way galaxy is thought to contain dark matter because it is home to a dense concentration of mass, including dense clusters of stars and a black hole. A conclusive finding of dark matter collisions in the galactic center would be a major step forward in confirming our understanding of our universe. "Finding direct evidence for these collisions would be interesting because it would help us understand the relationship between dark matter and ordinary matter," said Benjamin Safdi, a postdoctoral researcher at MIT who earned his Ph.D. in 2014 at Princeton.

To tell whether the signals were from dark matter versus other sources, the Princeton/MIT research team turned to image-processing techniques. They looked at what the gamma rays should look like if they indeed come from the collision of hypothesized dark matter particles known as weakly interacting massive particles, or WIMPs. For the analysis, Lisanti, Safdi and Samuel Lee, a former postdoctoral research fellow at Princeton who is now at the Broad Institute, along with colleagues Wei Xue and Tracy Slatyer at MIT, studied images of gamma rays captured by NASA's Fermi Gamma-ray Space Telescope, which has been mapping the rays since 2008.

Dark matter particles are thought to make up about 85 percent of the mass in the universe but have never been directly detected. The collision of two WIMPs, according to a widely accepted model of dark matter, causes them to annihilate each other to produce gamma rays, which are the highest-energy form of light in the universe.

According to this model, the high-energy particles of light, or photons, should be smoothly distributed among the pixels in the images captured by the Fermi telescope. In contrast, other sources, such as rotating stars known as pulsars, release bursts of light that show up as isolated, bright pixels.

The researchers applied their statistical analysis method to images collected by the Fermi telescope and found that the distribution of photons was clumpy rather than smooth, indicating that the gamma rays were unlikely to be caused by dark matter particle collisions.

Exactly what these new sources are is unknown, Lisanti said, but one possibility is that they are very old, rapidly rotating stars known as millisecond pulsars. She said it would be possible to explore the source of the gamma rays using other types of sky surveys involving telescopes that detect radio frequencies.

Douglas Finkbeiner, a professor of astronomy and physics at Harvard University who was not directly involved in the current study, said that although the finding complicates the search for dark matter, it leads to other areas of discovery. "Our job as astrophysicists is to characterize what we see in the universe, not get some predetermined, wished-for outcome. Of course it would be great to find dark matter, but just figuring out what is going on and making new discoveries is very exciting."

According to Christoph Weniger from the University of Amsterdam and lead author of the Netherlands-based study, the finding is a win-win situation: "Either we find hundreds of thousands of millisecond pulsars in the upcoming decade, shedding light on the history of the Milky Way, or we find nothing. In the latter case, a dark matter explanaton for the gamma ray excess will become much more obvious."

Funding for the Princeton/MIT research came from the U.S. Department of Energy under grant Contract Numbers DE-SC00012567, DE-SC0013999 and DE-SC0007968, and from the National Science Foundation under grant PHY-1066293 to the Aspen Center for Physics.