Just how quickly is the dark matter near Earth zipping around? The speed of dark matter has far-reaching consequences for modern astrophysical research, but this fundamental property has eluded researchers for years.

In a paper published Jan. 24 in the journal “Physical Review Letters,” an international team of astrophysicists provided the first clue: The solution to this mystery, it turns out, lies among some of the oldest stars in the galaxy.

“Essentially, these old stars act as visible speedometers for the invisible dark matter, measuring its speed distribution near Earth,” said Mariangela Lisanti, an assistant professor of physics at Princeton University. “You can think of the oldest stars as a luminous tracer for the dark matter. The dark matter itself we’ll never see, because it’s not emitting light to any observable degree. It’s just invisible to us, which is why it’s been so hard to say anything concrete about it.” 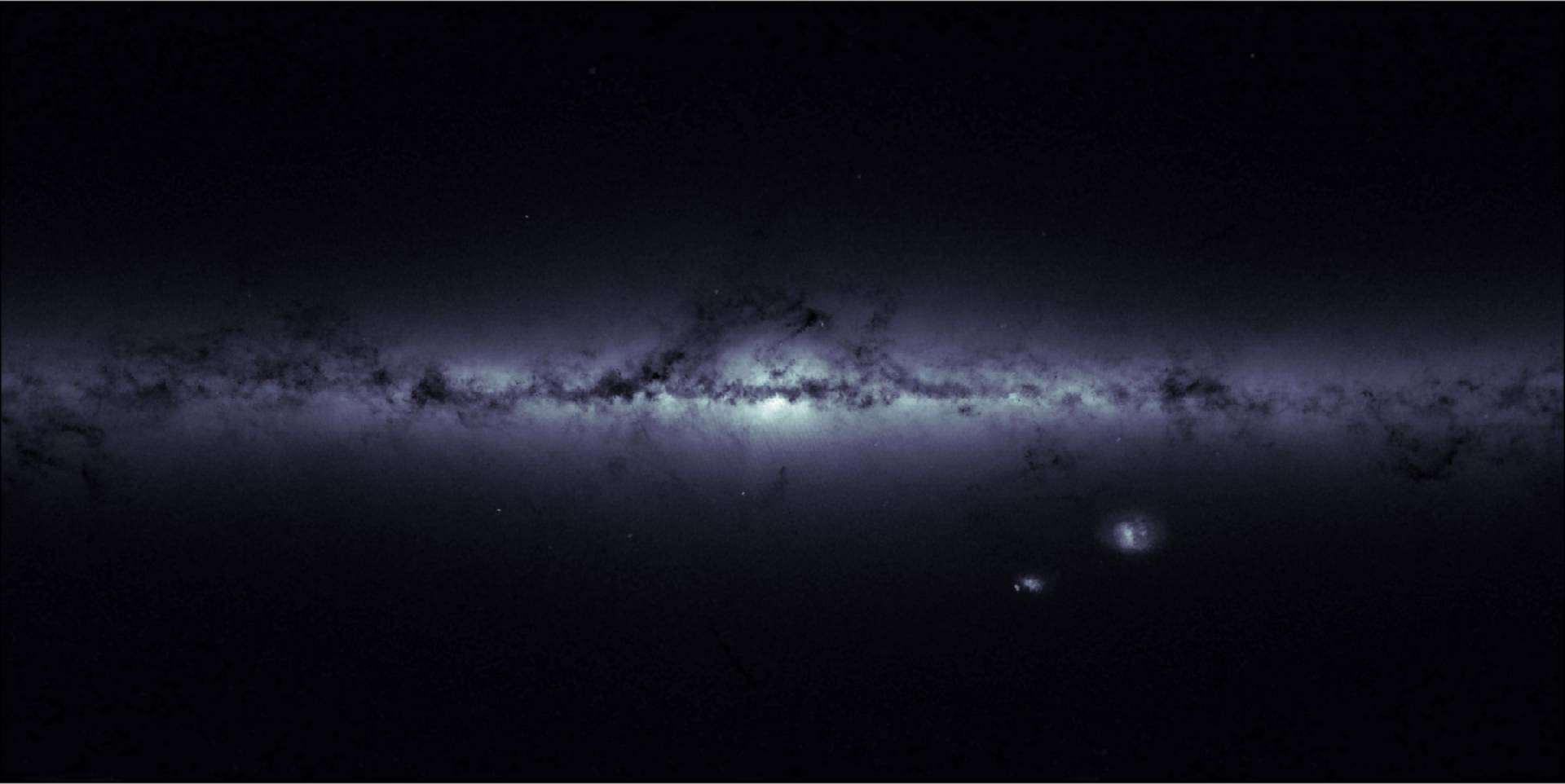 An international team of astrophysicists has identified a link between dark matter and the oldest stars in our galaxy, the Milky Way. This image of the Milky Way (and its neighboring Magellanic Clouds) is not a photograph but a visual representation of the locations of stars detected by ESA’s Gaia satellite. Brighter regions indicate higher concentrations of stars. The plane of the Milky Way, where most of the galaxy’s stars reside, runs horizontally across the center. Darker regions across this broad strip of stars correspond to dense, interstellar clouds of gas and dust that absorb starlight along the line of sight. (Image courtesy of ESA/Gaia – CC BY-SA 3.0 IGO)

In order to determine which stars behave like dark matter particles, Lisanti and her colleagues turned to a computer simulation, Eris, which uses supercomputers to replicate the physics of the Milky Way galaxy, including dark matter.

“Our hypothesis was that there’s some subset of stars that, for some reason, will match the movements of the dark matter,” said Jonah Herzog-Arbeitman, a Class of 2019 undergraduate and a co-author on the paper. His work with Lisanti and her colleagues the summer after his first year at Princeton turned into one of his junior papers and contributed to this journal article.

Herzog-Arbeitman and Lina Necib at the California Institute of Technology, another co-author on the paper, generated numerous plots from Eris data that compared various properties of dark matter to properties of different subsets of stars.

Their big breakthrough came when they compared the velocity of dark matter to that of stars with different “metallicities,” or ratios of heavy metals to lighter elements.

The curve representing dark matter matched up beautifully with the stars that have the least heavy metals: “We saw everything line up,” Lisanti said.

“It was one of those great examples of a pretty reasonable idea working pretty darn well,” Herzog-Arbeitman said.

Astronomers have known for decades that metallicity can serve as a proxy for a star’s age, since metals and other heavy elements are formed in supernovas and the mergers of neutron stars. The small galaxies that merged with the Milky Way typically have comparatively less of these heavy elements. 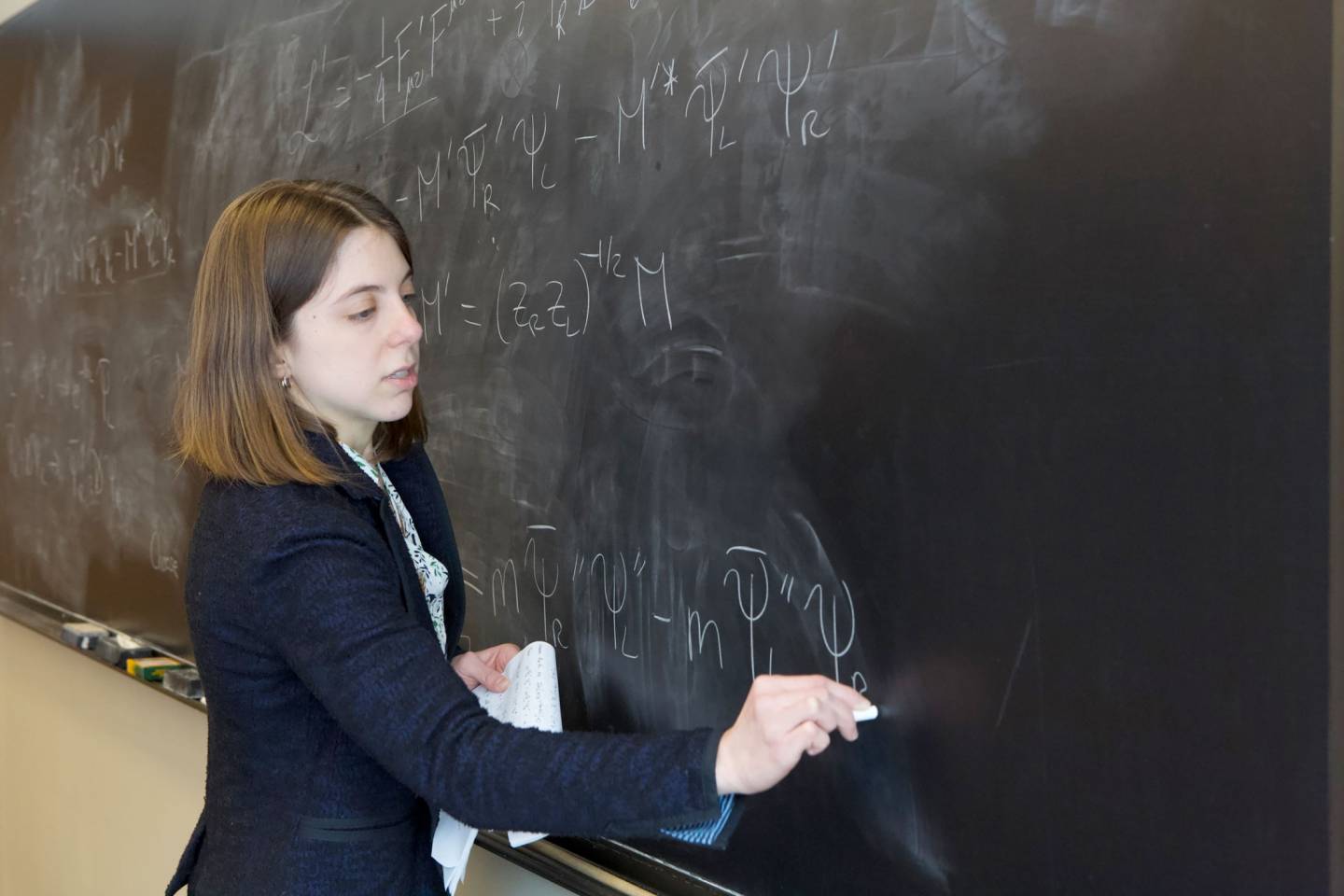 Mariangela Lisanti, assistant professor of physics at Princeton, and her colleagues have found a stopwatch for dark matter: The oldest stars in the galaxy.

Since 2009, researchers have been trying to observe dark matter directly, by putting very dense material — often xenon — deep underground and waiting for the dark matter that flows through the planet to interact with it.

Lisanti compared these “direct detection” experiments to a game of billiards: “When a dark matter particle scatters off a nucleus in an atom, the collision is similar to two billiard balls hitting each other. If the dark matter particle is much less massive than the nucleus, then the nucleus won’t move much after the collision, which makes it really hard to notice that anything happened.”

That’s why constraining the speed of dark matter is so important, she explained. If dark matter particles are both slow and light, they might not have enough kinetic energy to move the nuclear “billiard balls” at all, even if they smack right into one.

“But if the dark matter comes in moving faster, it’s going to have more kinetic energy. That can increase the chance that in that collision, the recoil of the nucleus is going to be greater, so you’d be able to see it,” Lisanti said.

Originally, scientists had expected to see enough particle interactions — enough moving billiard balls — to be able to derive the mass and velocity of the dark matter particles. But, Lisanti said, “we haven’t seen anything yet.”

So instead of using the interactions to determine the speed, researchers like Lisanti and her colleagues are hoping to flip the script, and use the speed to explain why the direct detection experiments haven’t detected anything yet.

The failure — at least so far — of the direct detection experiments leads to two questions, Lisanti said. “How am I ever going to figure out what the speeds of these things are?” and “Have we not seen anything because there’s something different in the speed distribution than we expected?”

Having a completely independent way to work out the speed of dark matter could help shed light on that, she said. But so far, it’s only theoretical. Real-world astronomy hasn’t caught up to the wealth of data produced by the Eris simulation, so Lisanti and her colleagues don’t yet know how fast our galaxy’s oldest stars are moving.

Fortunately, that information is being assembled right now by the European Space Agency’s Gaia telescope, which has been scanning the Milky Way since July 2014. So far, information on only a small subset of stars has been released, but the full dataset will include far more data on nearly a billion stars.

“The wealth of data on the horizon from current and upcoming stellar surveys will provide a unique opportunity to understand this fundamental property of dark matter,” Lisanti said.

“The authors have developed a clever technique [for] empirically estimating the velocity distribution of dark matter in the Milky Way galaxy,” said Jodi Cooley, an associate professor of physics at Southern Methodist University, in Dallas, who was not involved in the research. “It is clear that with data from Gaia, they will be able to refine and improve their analysis.”

The paper, “Empirical Determination of Dark Matter Velocities using Metal-Poor Stars,” by Jonah Herzog-Arbeitman, Mariangela Lisanti, Piero Madau and Lina Necib, was published in Physical Review Letters on Jan. 24. Lisanti is supported by the Department of Energy (DOE) under contract DESC0007968, as well as by the Alfred P. Sloan Foundation. Madau thanks the Prefecture of the Ile-de-France Region through the award of a Blaise Pascal International Research Chair, managed by the Fondation de l’Ecole Normale Superieure. Necib is supported by the DOE under contract DESC00012567.