New South to be renovated for inclusion of arts programs 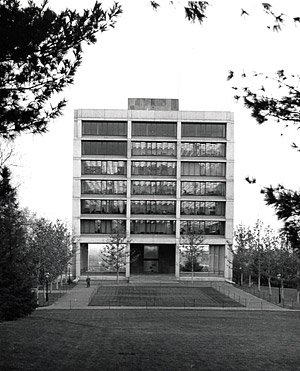 This photograph of New South was taken before the first floor was enclosed in 1982 and turned into additional offices. The high ceilings make the area well-suited to the acting, dance and warmup stations that will be constructed there.

New South, the location of administrative offices over the past 40 years, will be renovated in 2010 to also become the home of some academic functions associated with the Lewis Center for the Arts.

Scheduled to begin in February, the project will include the relocation of the Program in Creative Writing from 185 Nassau St. to New South as well as the creation of facilities for the programs in theater and dance. The space was made available when Princeton's finance and treasury operations moved from New South to 701 Carnegie Center in fall 2009.

New South, built in 1965, was designed by Edward Larrabee Barnes, who went on to design the Walker Art Center in Minneapolis, the Dallas Museum of Art and the IBM corporate headquarters in Manhattan. One of the University's first high-rise buildings, it has two stories below ground and seven above. The modern structure, made of glass and concrete, originally was open on the first floor except for the main entrance. The space was enclosed in 1982 and turned into additional offices.

The first floor open design originally had high ceilings, which make the area well-suited to the acting, dance and warmup stations that will be constructed, according to Jean Crider, project manager in the Office of Design and Construction. The first-floor lobby also will be renovated to provide a larger and more attractive entrance to the building.

The Program in Creative Writing will occupy the sixth floor. The space will include offices, three classrooms and a library.

Between the beginning of construction and fall 2010, several other moves will take place in the building. The Office of Human Resources will relocate from the first floor to the second and third floors, with the reception area stationed on the second floor. The TigerCard Office will move from the A level to the third floor, which also will contain swing space for staff members from the Office of Information Technology who need temporary offices while on campus from 701 Carnegie Center.

The Office of Research and Project Administration and the Office of Technology Licensing will remain where they are, but will be relocating some personnel on the fourth floor.

On the fifth floor, the housing department will take up residence, moving from its current space in the MacMillan Building. The seventh floor will remain as it is with human resources training rooms and a conference room. 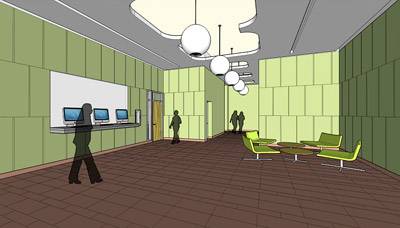 This architect's rendering shows the renovated first-floor lobby that will provide a larger and more attractive entrance to the New South.

The University is working with James Bradberry Architects of Bryn Mawr, Pa., on the project. The firm has completed other projects at Princeton, most recently improvements on the 100 level of the Frist Campus Center, as well as an addition and renovations at Ivy Club on Prospect Avenue.

Crider said the plan is to reuse much of the furniture in the building to support sustainability efforts.

The renovation and move will put the arts facilities in close proximity to the proposed Arts and Transit Neighborhood on the western edge of the campus. The neighborhood would be the home of the Lewis Center administrative offices as well as the requisite new teaching, rehearsal and performance spaces. New public plazas and improved traffic circulation would complement these new facilities and a new New Jersey Transit Dinky station. The University currently is seeking zoning approvals and funding to move ahead with the project.

Lewis Center programs will continue to occupy the space vacated by the Program in Creative Writing at 185 Nassau St., which will remain an active creative and performing arts building with facilities including the Hagan Dance Studio, the Matthews Acting Studio, the Stewart Theater and the Lucas Gallery.