When Devika Balachandran and David Hoyos arrived in Mississippi last June to embark upon an eight-week-long internship, the two Princeton University undergraduates did not know each other — but that was about to change.

Balachandran and Hoyos worked alongside one another in a summer research project sponsored by the Princeton Environmental Institute (PEI) designed to better understand an ecological quandary: how agricultural nitrogen pollution influences ground and stream waters that drain into the Mississippi River. 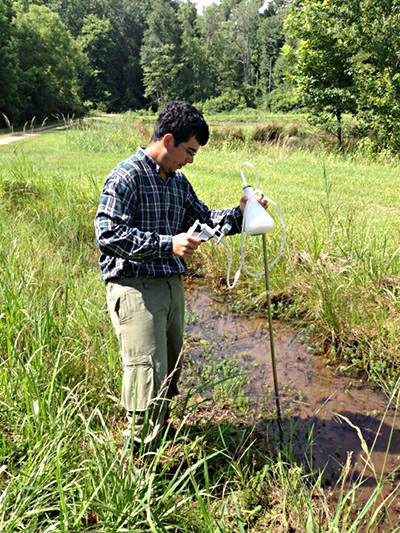 Princeton sophomore David Hoyos collects environmental samples during an eight-week-long research project to study pollution of the Mississippi River Delta. Sponsored by the Princeton Environmental Institute, the summer internship allowed Hoyos to gain his first fieldwork experience and to deepen his interest in environmental science. (Photo by Devika Balachandran, Class of 2014)

The students had previously enrolled in PEI's certificate program in environmental studies, which is geared to Princeton undergraduates interested in the scientific, political, humanistic and technological dimensions of environmental problems. While  Balachandran and Hoyos shared a passion for environmental science, they were in Mississippi for different reasons.

For Balachandran, an ecology and environmental biology major, the internship was an opportunity to conduct further research to strengthen her senior thesis, which focuses on nitrogen cycling associated with agricultural activity in the Mississippi River Delta.

"At first I thought I wanted to spend my summer really far from where I grew up," said Balachandran, a Baton Rouge, La., native who spent her previous spring semester studying in Kenya. "But once my thesis adviser, ecology and evolutionary biology professor Lars Hedin, informed me about this opportunity, I realized it was exactly what I wanted to do. It struck me as a great way to give back to where I came from."

Balachandran was also encouraged by a previous PEI internship. During the summer of 2012, she spent two months working alongside members of the Louisiana State Department of Justice and the Coastal Protection and Restoration Authority in Baton Rouge, where she researched the evolution and performance of domestic voluntary carbon markets and examined the regulatory framework of California's cap-and-trade program.

"That project made me realize there is a lot of really interesting research that can be done within the United States, and you don't necessarily have to travel to exotic foreign locations to conduct a meaningful project," said Balachandran. "That project also gave me some initial exposure to the concept of ecosystem services, which has definitely been a driving factor in a large portion of my subsequent independent research and term papers for various courses."

For Hoyos, a sophomore, the internship offered his first taste of field research and lab work. "Until this internship, I was really excited to learn about environmental theories and concepts in class, but how to apply those concepts in the real world remained a mystery. This experience was my first glimpse at what that looked like," he said.

The ecological problem Balachandran and Hoyos travelled to Oxford, Miss., to investigate was at once straightforward and complex.

When farmers apply fertilizer to their crops it often contains a very high concentration of nitrogen. When it rains, that fertilizer — along with the nitrogen — flows into nearby streams that feed the Mississippi River and eventually flow into the Gulf of Mexico, to the detriment of marine life.

Prior research done by the U.S. Geological Survey (USGS) and the U.S. Department of Agriculture (USDA) found that nitrogen concentrations in the Mississippi Delta are lower than expected whereas concentrations are much higher farther north near the Farm Belt. The goal of this project was to determine why.

"We were going down there to try and figure out what was happening between the application of fertilizer and the time it reaches the Mississippi," said Hoyos. 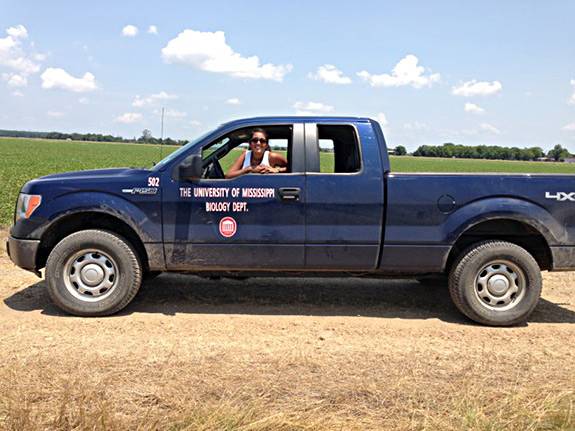 For Princeton senior Devika Balachandran, the summer project helped her make progress on her senior thesis and reaffirmed her interest in studying the relationship between humans and the environment. The experience also allowed her to work with fellow researchers, including from the University of Mississippi. (Photo by David Hoyos, Class of 2016)

The challenges and rewards of collaboration

"The hardest part was figuring out what to do," said Balachandran. "Up until that point I was used to having my hand held through big research projects, with faculty giving me lots and lots of guidance and feedback. In Mississippi I had free rein to design this project however I wanted, which is typical of the senior thesis experience. It was both really exciting and also a bit intimidating."

This is where the advice and guidance of Hedin and Clifford Ochs, an associate professor of biology at the University of Mississippi, became invaluable.

"My role in all of this was to give them the confidence to think about the broad issues, such as considering how this entire Mississippi River Delta system worked," said Hedin, who helped prepare students before they left and kept in touch by video conference while they were in the field. "We had very clear and open conversations and shared a lot of ideas. This was all about giving them the tools they needed to dare to take on larger questions than they may have been used to asking as students."

In Mississippi, Ochs interacted daily with Balachandran and Hoyos. During the first three weeks of the internship, the three, along with University of Mississippi graduate student Michael Keating, worked to determine the best approach for their research.

According to Balachandran, most prior research had focused on deep groundwater, so she and Hoyos decided they would instead concentrate on the shallower top layers of water and sediment in the area, which might provide previously unknown clues to the nature of nitrogen dispersal. Also due to their interest in this research, colleagues at the Mississippi USGS and USDA facilities collaborated with Balachandran and Hoyos in locating and selecting final samples.

"Having to collaborate with others and come up with sampling strategies was at first a big challenge for me, but also a great one," said Hoyos. "I learned that this type of research is very collaborative, and you need to be in sync with others so it can be successful. And it was very cool to see how it all came together and how we ended up working toward the same direction in unison."

Returning to Princeton this fall, Balachandran and Hoyos knew they still had a lot of work ahead. The samples had been shipped from Mississippi and the taxing job of lab analysis started. The students already have made some interesting discoveries.

"For one thing, we've learned that the soil in the Delta, at least in the parts we sampled, is water-saturated and high in clay content and the water moves much more slowly than in the Upper Mississippi River Basin," Balachandran said.

"This combination creates an environment low in oxygen, leading to denitrification, which results in the release of gaseous nitrogen back into the atmosphere. We believe this is how the concentration of nitrogen is being reduced along the pathway between the farmlands and the wetlands in the Delta. We are using genetic and isotope analysis to test this hypothesis," she said.

While the ultimate impact of their fieldwork is yet to be determined, the effect of the experience on Balachandran and Hoyos is apparent.

"They have come back to campus more motivated than ever," said Hedin. "And they're inspired by having had the opportunity to apply their knowledge to the real world and work together on a large-scale project. I think that’s a transformative experience for a student. So much of their time is spent in books or reading case studies. But to be a part of actually figuring something out — and in this case a situation that has social and policy implications — is fantastic."

Hoyos said the PEI internship confirmed his decision to get a certificate in environmental studies.

"I'm more excited than ever about studying ecological systems and the implications that might have on our future," he said.

For Balachandran, the Mississippi River Delta project also yielded a new perspective, not only on the rewards of fieldwork but also on what she plans to do after she graduates this spring.

"One of the things that was a revelation to me was how cool it is to do fieldwork on someone else's land," she said. "For me, I'm just collecting dirt to study in a lab. But to farmers it's so much more than that.

"That land may have been in their family for generations, and I never really thought about that before I saw them working and tending to the land, caring for it so deeply. It became a lot more personal to me and reaffirmed my interest in continuing to study the relationship between humans and their environments, because you can never separate the two," Balachandran added.

For students interested in summer internships, including those offered through PEI, an All-Princeton Resources Fair will be held from 1-4 p.m. on Friday, Dec. 6, on the lower level of Frist Campus Center. On Jan. 8, PEI will hold an internship information session at 4:30 p.m. in Room 10, Guyot Hall.