Nine new technologies with promising societal or commercial applications will get a boost from a Princeton University program aimed at bridging the gap between the laboratory and the marketplace.

The recipients of this year's Princeton's Intellectual Property Accelerator Fund will each receive grants to support activities — such as building a prototype or conducting additional data collection — with the goal of transforming innovations into commercially viable technologies for development by companies and startups.

"University research is focused on discovering fundamental knowledge," said A.J. Stewart Smith, dean for research and the Class of 1909 Professor of Physics. "But for discoveries that have the potential to improve how we live, the University provides support to bring those innovations to the point where they can be further developed by corporate partners, which have the expertise to bring innovations to the public," Smith said.

"The range of innovations being funded this year is a testament to the creativity and insightfulness of Princeton investigators," said John Ritter, director of the University's Office of Technology Licensing. "We have innovations ranging across the scientific disciplines, from molecular biology to physics to engineering."

Among the selected technologies are a portable nitrogen sensor for detecting greenhouse gas emissions, novel materials that promise to speed up computers, and a technique for creating drugs capable of homing directly to targets such as tumors.

Medicines that travel directly to a tumor or other target in the body promise to be highly effective at reduced doses, potentially reducing side effects for the patient. But attaching these "molecular address labels" to drug molecules has proved difficult. Tom Muir, Princeton's Van Zandt Williams Jr. Class of 1965 Professor of Chemistry, and his colleagues have developed a new technique for fastening these targeting molecules to drugs.

The method relies on naturally occurring proteins, called split inteins, found in a certain type of blue-green algae. Split inteins come in pairs that can bind each other tightly like opposing strips of Velcro. Muir's team found an efficient way to attach one intein to the targeting molecule, which is an antibody that binds to certain types of immune cells, while attaching the matching intein to the drug molecule. Mixing the antibody-inteins and the drug-inteins together allowed the matching inteins to come together, fusing the antibody tightly to the drug. 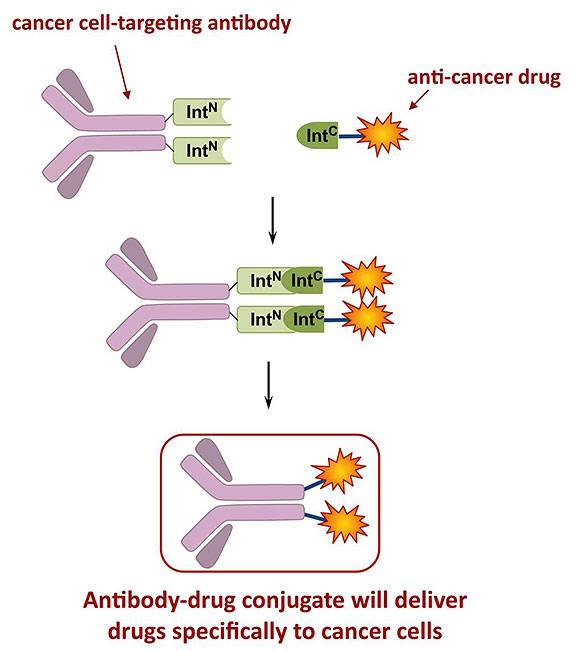 An anti-cancer synthetic drug molecule is site-specifically attached to an antibody (in pink) using split inteins (IntN and IntC in green). The antibody is able to recognize cancer cells and will deliver them the toxic drug without affecting healthy cells, thus reducing side effects. (Diagram courtesy of Miquel Vila-Perello)

"With this new split-intein based method, we have an exciting and important way to generate targeted drugs," said Muir. "The Princeton IP Accelerator Fund will help us explore how to use our method to scale up the production of these targeted drugs."

The split-inteins used for this project were identified by graduate student Neel Shah, associate research scholar Miquel Vila-Perello and postdoctoral research associate Zhihua Liu. The research was supported by grants from the National Institutes of Health.

Although not as well known as carbon dioxide or methane, nitrous oxide is a significant greenhouse gas that is released intermittently after the spread of nitrogen-based fertilizers on farm fields. Yet measuring the levels of nitrous oxide in a field is difficult because today's sensors are the size of refrigerators and consume large amounts of power. A portable nitrous oxide sensor, easily carried from place to place, could radically change how scientists and regulators monitor this greenhouse gas. 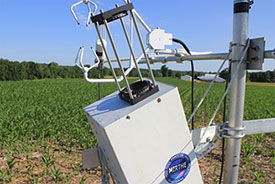 A team led by Assistant Professor Mark Zondlo in the Department of Civil and Environmental Engineering has developed a sensor capable of detecting the greenhouse gas nitrous oxide, which is released when fertilizers are spread on fields. The portable sensor allows measurements to be taken quickly and frequently, which could greatly expand the understanding of how nitrous oxide is released and how its release can be controlled. (Photo courtesy of Mark Zondlo)

Mark Zondlo, assistant professor of civil and environmental engineering, and his team have developed a fast, sensitive and portable nitrous oxide sensor that can be carried in one hand. The sensor uses a battery-powered laser, called a quantum cascade laser, to fire a beam of light through a sample of air, while a detector measures the light absorption to deduce the amount of nitrous oxide in the air.

"Our sensor has precision and stability similar to the best sensors on the market today, but at a fraction of the size and electricity requirements," Zondlo said. "We are already getting phone calls from people who want to buy it."

The research team tested the sensor for several weeks last summer in a corn field at Michigan State University and found it measured nitrous oxide accurately but needed additional testing and refinement before it would be ready for sale. The support from the IP Accelerator Fund will enable the Princeton team to improve the technology, the early phase of which was supported by a National Science Foundation grant.

Co-inventors with Zondlo on the project include graduate students Kang Sun and David Miller as well as postdoctoral researchers Lei Tao and Amir Khan.

Lighting the way to faster computers

Computers are faster than ever, but today's silicon-based circuits are beginning to face their limits. One promising idea is to replace the relatively sluggish electrons in circuits with light, which is speedier than electrons. While light is already used to transmit information long distances — for example, in fiber optic cables — the promise of light-based components, or "photonics," has been difficult to achieve.

The challenge is to find a way to guide light in specific directions through the extremely small data-processing structures such as those found on a computer chip. A team led by Paul Steinhardt, Princeton's Albert Einstein Professor in Science, and Salvatore Torquato, professor of chemistry and the Princeton Institute for the Science and Technology of Materials, has developed new structures that can do just that. 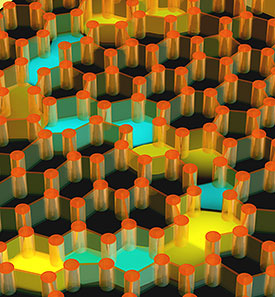 Structures known as hyperuniform disordered solids (HUDS), designed by researchers at Princeton, could lead to the development of computers and other technologies based on the manipulation of light rather than electrons. The HUDS model pictured here allows certain frequencies of light to flow in specific paths from chamber to chamber, while blocking other frequencies of light. (Image courtesy of Paul Steinhardt)

These new structures, called hyperuniform disordered solids or HUDS for short, contain a complex architecture of internal translucent chambers that permit only certain frequencies of light to travel through the materials. "The materials are in some sense a hybrid between perfect crystals and perfectly disordered solids — they are a state of matter in between," said Torquato. Using precision manufacturing techniques, the researchers can create HUDS with unprecedented light-controlling capabilities.

The team — which includes former Princeton postdoctoral research Marian Florescu now at the University of Surrey in the United Kingdom, Princeton doctoral graduate Weining Man now at San Francisco State University, and former Princeton professor Paul Chaikin, Princeton's Henry DeWolf Smyth Professor Emeritus now at New York University — have built prototype HUDS that are about the size of a coffee can. While the fundamental research was supported by the National Science Foundation, a start-up company, Etaphase, has licensed the technology and is working on the next step — building these devices small enough to compete with semiconductors in electronic applications.

"The infusion of support from the IP Accelerator Fund could not have come at a better time," said Steinhardt. "We and Etaphase have been operating with very little funding up to this point. We are now poised to make the first prototypes on the submicron scale, and these funds will give us a timely boost in our power to move things forward."

In addition to the three technologies described, the winners of this year's award are: