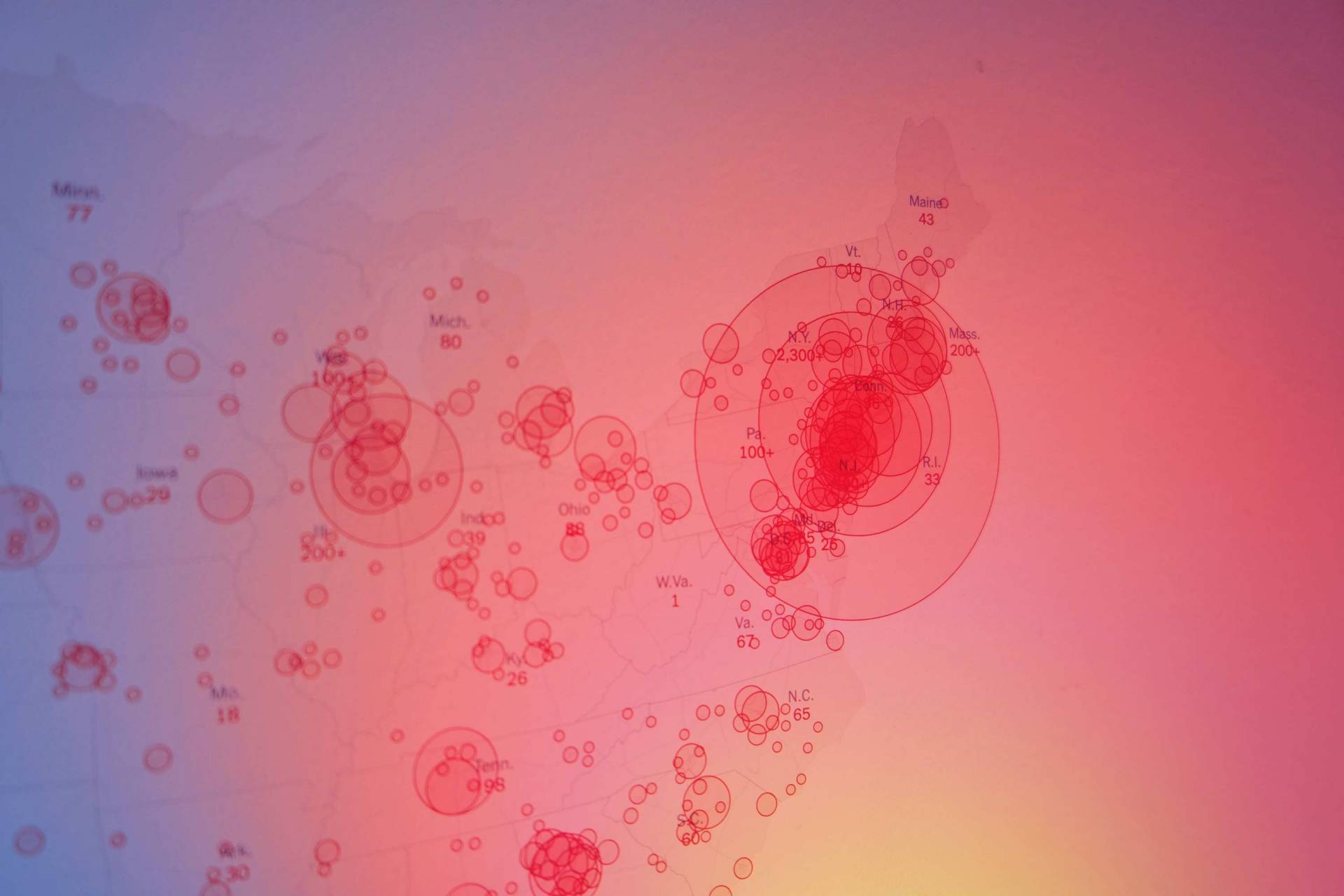 A county-by-county analysis of the United States by Princeton researchers suggests that rural counties with high populations of people over 60 and limited access to health care facilities could eventually be among the hardest hit by COVID-19. They conclude that allocating emergency resources to hospitals and communities away from major population centers could be crucial to mitigating the pandemic.

Photo by Brian McGowan on Unsplash

A county-by-county analysis of the United States by Princeton University researchers suggests that rural counties with high populations of people over 60 and limited access to health care facilities could eventually be among the hardest hit by the coronavirus pandemic (COVID-19).

Counties concentrated in the western United States, the northern Midwest, Florida, and northern New England would have the highest ratios of hospitalizations to number of people, according to a paper originally published April 11 on medRxiv and published June 16 in the journal Nature Medicine. The researchers conclude that allocating emergency resources to hospitals and communities away from major population centers could be crucial to mitigating COVID-19.

“The burden is still going to be high in urban areas and the absolute number of cases will be highest in cities, but we could see rural areas have a higher per capita burden and a higher ratio of cases to hospital beds,” said first author Ian Miller, a graduate student in ecology and evolutionary biology at Princeton. 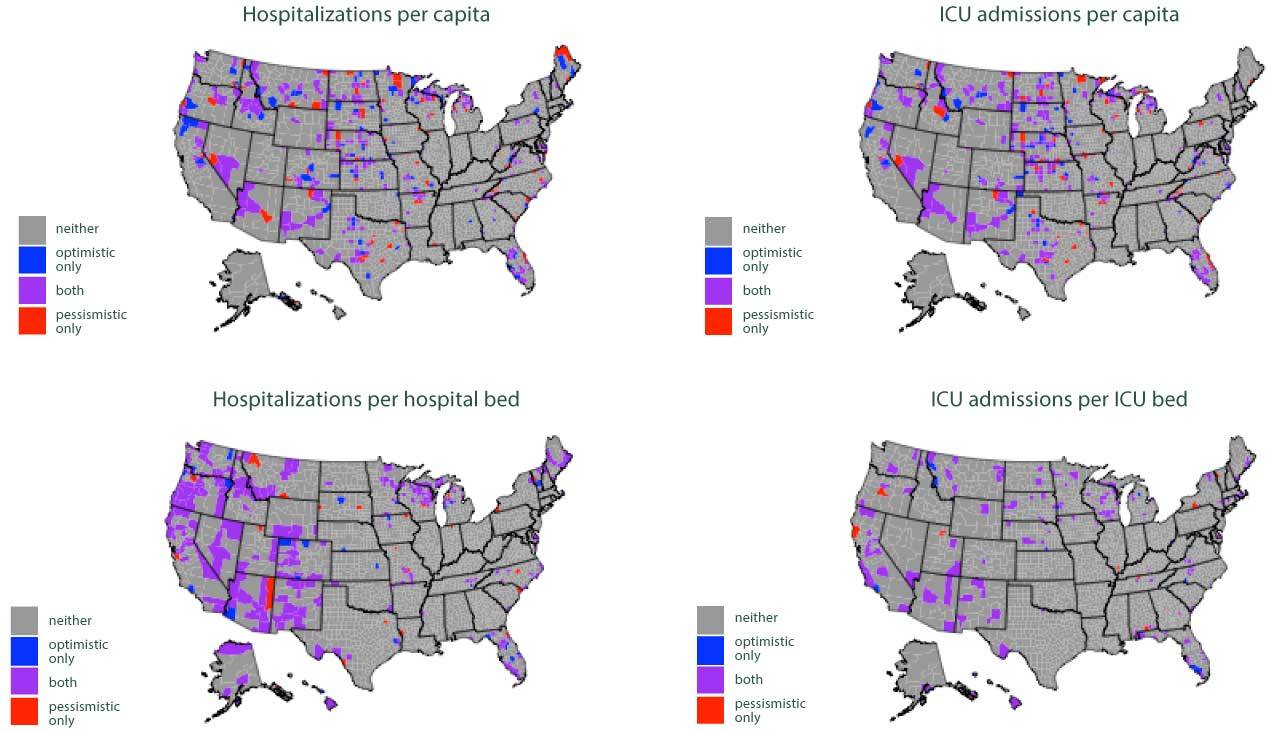 The researchers identified the counties that could have the highest ratios of coronavirus-related hospitalizations to number of people if the infection rate reaches 20% of the county population. They simulated an optimistic low-infection scenario (blue) and a pessimistic high-infection scenario (red). Counties that became overwhelmed in both (purple) were considered most vulnerable. The top row indicates the ratio of people in need of hospitalization (right) or intensive care (left) for coronavirus, while the bottom row shows the ratio of people entering the health care system compared to the number of available hospital (right) or intensive care unit (left) beds at the county level.

Miller and co-author Alexander Becker, also a graduate student in ecology and evolutionary biology, explained that hospitals — and particularly intensive care units (ICUs) — are unevenly distributed nationwide, with many regions having limited or even no facilities capable of providing the care needed to treat severe cases of COVID-19.

“We’re hoping that our study will prompt state and public health officials to keep an extremely close eye on rural areas,” said Miller, adding that he and his co-authors have been advising and consulting with officials in Missouri and shared their results with officials in Pennsylvania. “If they know where the vulnerable counties are, they can allocate resources to those counties, or try to help direct cases originating in those counties to health systems with more adequate capacity.”

The researchers conducted an epidemiological simulation that compared how many hospital and ICU beds each county currently has — according to the American Hospital Association — to the number of coronavirus cases they would experience if the infection rate reaches 20% of the county’s population.

Using 2018 demographic data from the U.S. Census Bureau, the researchers broke down each county’s population by age group, starting at 0-9 and continuing every 10 years through the final designation of 70-plus. Their model then factored in the proportion of each age group that has been likely to become severely ill, with people over 60 being the most vulnerable.

The researchers ran two scenarios. In the “optimistic” scenario, disease transmission was relatively slow, people had contact mostly with those within their age group, and people presenting symptoms of coronavirus were effectively quarantined. In contrast, the “pessimistic” scenario was characterized by a high transmission rate, homogenous contact between different age groups, and people showing signs of infection being quarantined too late or not at all.

The counties that became overwhelmed in both the optimistic and the pessimistic scenarios are those that the study authors identified as most vulnerable to the current outbreak.

The researchers broke down each county’s population by age group using 10-year “bins” from 0-9 years old through 70-plus. Their model then factored in the proportion of each age group that has been likely to become severely ill — with people over 60 being the most vulnerable — and compared that to the available health care facilities in that county. Counties concentrated in the western United States, the northern Midwest, Florida, and northern New England emerged as the most at risk.

The Princeton study comes at a time when — after being largely concentrated in major coastal cities — coronavirus infections are starting to climb in rural areas. As of April 10, the virus had reached nearly three-quarters of the country’s rural counties, with the case rate being nearly double what it was six days earlier, according to The New York Times. Meanwhile, the last states to issue stay-at-home orders are among those with counties lacking in-county health care facilities.

“The idea that rural areas are immune to coronavirus is not the reality,” Becker said.

“Because people’s needs are so different within a state, that motivated us to look at the county level to get as high a resolution as we could,” he said. “Maybe these results can be used as a preparation guide for officials in counties that are at risk, especially if there’s a large distance between a rural area and an urban area with greater access to health care.”

“We’re not trying to tell public health officials to focus only on rural areas or only on urban areas,” Miller said. “We’re trying to give them a holistic picture of the burden all of the different parts of their state might face so they can try to provide equitable care.”

The paper, “Disease and healthcare burden of COVID-19 in the United States,” was published June 16 in Nature Medicine. This work was supported by National Science Foundation Graduate Research Fellowships.