Responding to a challenge that tragic necessity has thrown to countless research labs around the world, a team from the Princeton Department of Chemistry will deploy its new cell mapping technology to shed light on the molecular interplay between COVID-19 and its host. The team is collaborating with Princeton molecular biologists who study viruses. 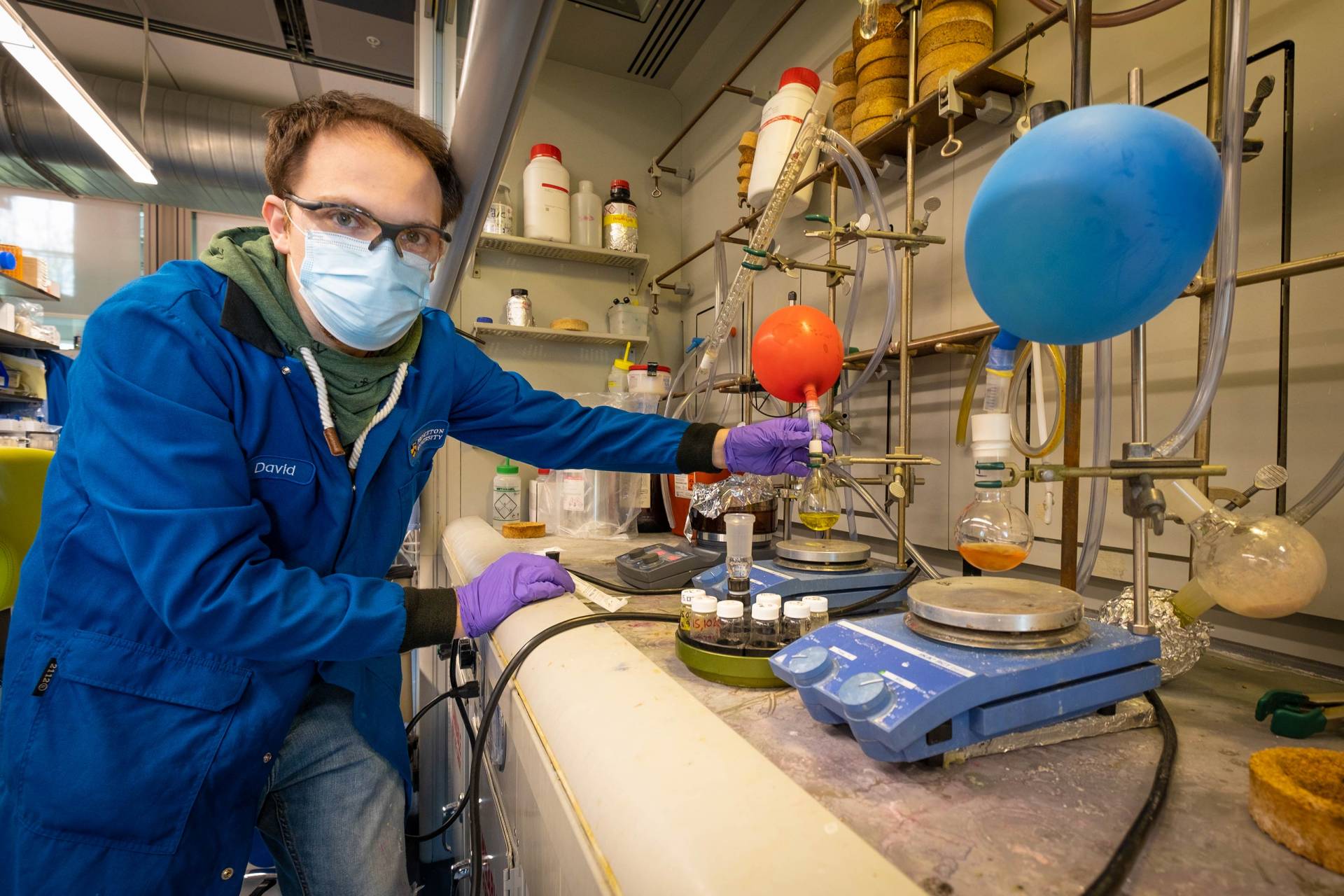 Postdoctoral Fellow David Fernández, of the MacMillan Group, preparing photocatalysts under a nitrogen atmosphere contained by the colorful balloons. Face masks are currently being worn by researchers to protect each other from virus transmission. There is no active virus in any of the materials that they handle.

A tool called µMap, announced just two months ago by the MacMillan Group, is the basis for a research project to reveal how human proteins communicate with viral particles on a cell surface, interactions that drive a multitude of health outcomes for the host. The group hopes this “proximity labeling” system will provide valuable data to scientists trying to understand the coronavirus infection cycle as they race to develop drug therapies.

As a starting point, the group will zero in on the tiny spikes protruding from the virus particle. It is believed that a unique folding action at the tip of the spikes allows COVID-19 to tightly attach to a cell via a receptor called ACE2, or, angiotensin converting enzyme-2. But, is this the only molecule required for the virus to enter cells?

“Everyone believes that the spike binds with this protein called ACE2. We want to figure out where else it’s going. No one knows. It’s clear there should be other receptors. But right now, there’s no way of figuring out what those are, and no one has any guesses,” said Jacob Geri, a postdoctoral research fellow with the MacMillan Group. “Our µMap technology is uniquely poised to answer that question.”

Or, as third-year graduate student Beryl Li put it, “You first have to know what to target before you figure out how to target.” 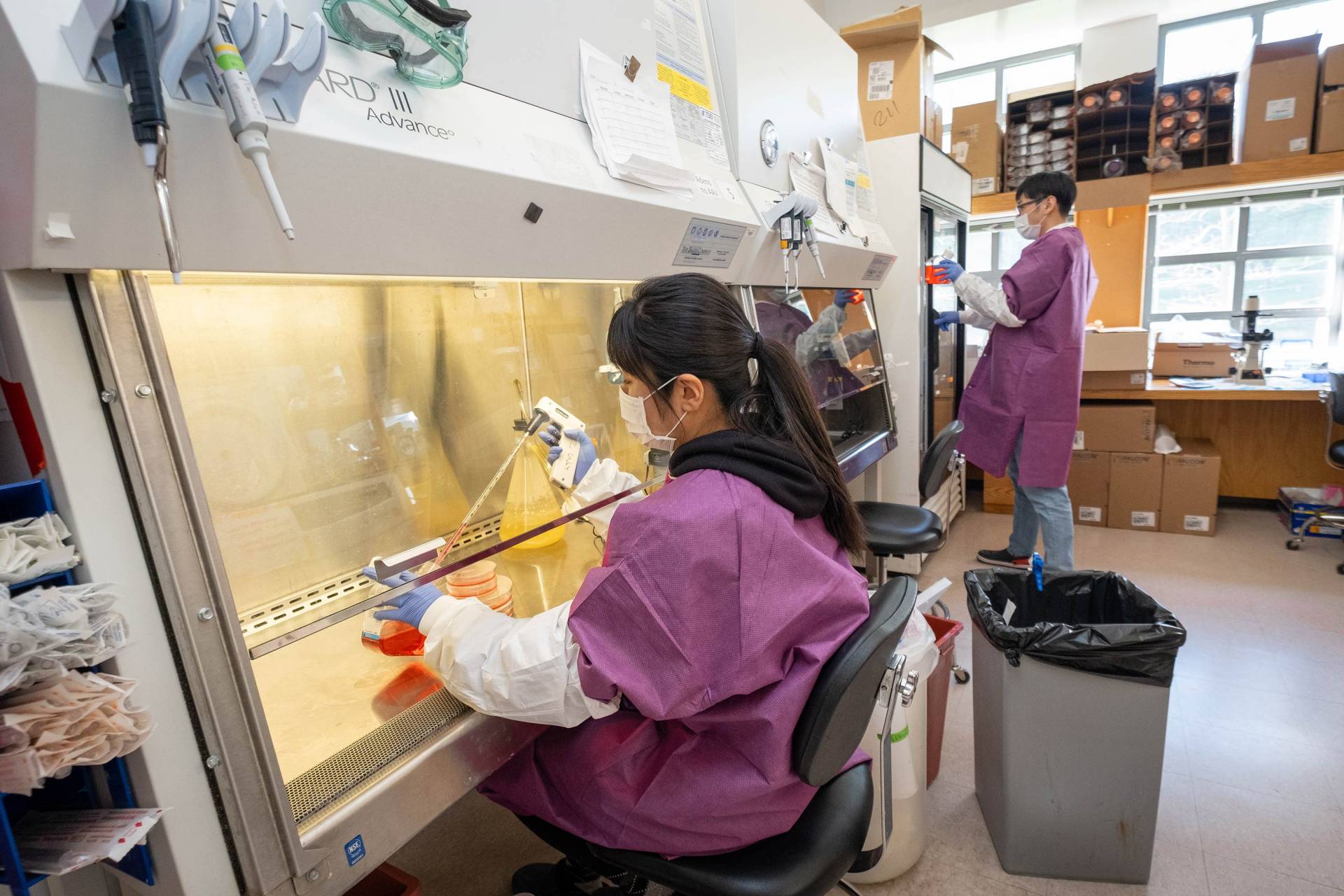 Postdoctoral Fellows Saori Suzuki (foreground) and Tomokazu Tamura (background), of the Ploss Lab, preparing pseudo-virus cultures for use in collaboration with researchers in the MacMillan Group.

In collaboration with Alexander Ploss, a leading virologist and associate professor in the Department of Molecular Biology, the Princeton scientists hope the project will yield answers for the global research community within two months or less.

“Viruses are highly dependent on a multitude of host factors to go through their infection cycles, and SARS-CoV-2 is no exception,” said Ploss. “Many of these cellular factors are not yet defined for SARS-CoV-2. Any one of such host factors could represent a target for therapeutic intervention. We aim to define precisely which molecules SARS-CoV-2 interacts with during viral uptake and during viral replication.

Ploss was one of seven Princeton faculty members to receive University rapid-research funding for his initiative to develop a version of SARS-CoV-2 that is less dangerous for labs to work with and that can be safely handled under less stringent controls. His initiative aims to broaden the pool of researchers able to study the virus.

While the University’s research enterprise has largely been shuttered to curtail the spread of COVID-19, several labs have special clearance to conduct coronavirus-related research on campus. The MacMillan Group and the Ploss Lab are among them.

The MacMillan Group’s breakthrough µMap technology, announced two months ago in Science, was originally developed to target therapeutics for cancer treatment. The technology uses a photocatalyst, or, a molecule that spurs a chemical reaction when activated by light. The reaction in turn generates a marker that tags molecular neighbors within a radius of 1 to 10 nanometers around a particular protein, giving scientists a precise map of exactly “who” is communicating with whom.

Researchers will use pseudoparticles generated by the Ploss Lab for their experiments. A pseudoparticle is a noninfectious variant of the parent virus that causes the COVID-19 disease, known in the scientific community as SARS-CoV-2. This is an essential step in the study of coronavirus because the actual SARS-CoV-2 virus can only be handled at high-level biosafety containment facilities approved by the Centers for Disease Control and Prevention. The inactive particle being developed in the Ploss Lab is not infectious and yet has the same properties and a similar set of proteins as the parent virus.

In the first of a series of planned experiments designed by MacMillan Group postdocs Geri, Aaron Trowbridge and Ciaran Seath, chemists will place their photocatalyst directly on the viral spike itself. The catalyst will then generate markers that map where that particle travels and what the spike does on the cell surface as it attempts to establish its hold and replicate itself to produce a runaway infection.

“It’s a very simple but very clever experiment that will give us tons of valuable information about how these things actually attach to the cells,” said David MacMillan, the James S. McDonnell Distinguished University Professor of Chemistry. “It’s that interaction that causes the virus to open up a healthy cell and then basically take its own inner machinery and put that in the healthy cell.

“If we can understand that, it will let people have key information to think with as they develop therapies,” he said.

The MacMillan Group along with Ploss Lab postdocs Saori Suzuki and Tomokazu Tamura will deepen this knowledge with additional experiments that genetically encode µMap into parts of the virus operating inside the cell. These experiments may yield information on “druggable pathways” targeting viral replication that have not yet been explored.

“One of the major questions people need to ask when developing drugs for treatment is, how do you know what the drug you’re making is specifically interacting with?” said Trowbridge. “People are repurposing current drugs that are on the market. But if we want to work out if they’re effective, we need to know what they’re targeting.

“So, you could think about how COVID enters a cell, how it infects a cell, how it makes more of itself, and how it leaves,” he added. “Where a lot of traditional methods often fail to identify targets, µMap can really pick those up. We should be able to not only identify things that are hitting the virus, but maybe other targets within the cells that people haven’t looked at before.”

Members of both labs said they are “thrilled” to be involved in the global effort to defeat COVID-19, acknowledging nevertheless that this is not how research is typically carried out. The µMap technology, for instance, took over two years to develop. But the urgent need for a therapy to treat coronavirus necessitates the deadline-driven approach.

“What you should be doing in research is things that are a little bit speculative. You should always be expanding that horizon as much as possible,” said Geri. “But here, the challenge is a little bit different because the only outcome that is useful is the one that has an impact on drugs that are already out there.”

Geri added, “We’re focusing our efforts on questions that can be answered now, using technologies we already have.”